Amnesty Group Participates in Youth Conference on Freedom of Expression

On Friday the 2nd of December, Notting Hill’s very own Amnesty group ventured out to Shoreditch, to visit Amnesty International’s London Headquarters, for a Youth Conference.

The group consisted of a few students from every year who were very interested in the main activities of the day; which were mainly centred around the topic “protect the child.”

After promptly leaving school at 8:30am, the group took the new Elizabeth Line from Ealing Broadway to Liverpool Street station for an arrival at the headquarters at 10am. Upon arrival the team were astounded by the grandeur of the building, from which hung a rather large neon sign reading “HUMANITY WINS.” Once inside, they were warmly welcomed by the staff and fellow ambassadors for Amnesty, then all given name tags and had the difficult task of choosing which activities to participate in.

The itinerary for the day was very exciting and consisted of many talks from a youth panel of activists from across the country, such as the seventeen year old Monty Lord who has founded his own charity to serve and protect children’s rights. After entering the conference room, we were sat with other youth activists and participated in an ice-breaker activity which helped us familiarise ourselves with the other students, as well as being given gift-bags from the headquarters. We then listened to the youth panel present their thoughts and opinions on interesting issues relating to children’s fundamental rights. One of the panelists was a seven year old girl who participated in strikes against her local council for demolishing their playground.

Shortly after the talk we were then ushered to the group activities which we had selected. The first topic was climate change and we created interactive posters and a presentation on the topic ‘How does climate change effects children rights?’ Then we had an amazing lunch at the headquarters where we got to talk to some on the members on the youth panel and discovered how they had managed to achieve such big changes at such young ages. We then listened to a talk on the digital world and Social Media, which was particularly interesting as we learnt a lot of new information on internet safety and how major companies like Instagram and Snapchat regulate age restrictions and adult content for young children or adolescents. To finish the event we heard an amazing talk from Oklahoma’s Child Governor who gave her opinions on lowering the voting age, which she was strongly in favour of. Finally we took some group pictures with the posters we had made and wrapped up the amazing trip. 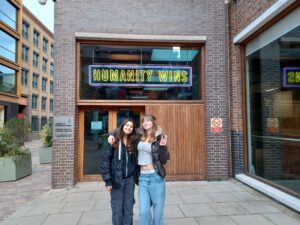