Half Term Classics Trip to Greece

In the October half-term 21 classicists from Years 10-12 set off to Greece for 5 days. Here is a summary of what we got up to: 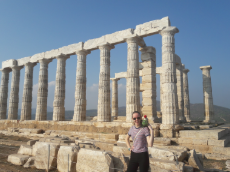 On our first day of the trip, we all climbed out of bed extremely early to make our way to Heathrow for 4:30 am! After enjoying a quick breakfast at the airport, we got on our flight to Athens and finally arrived at 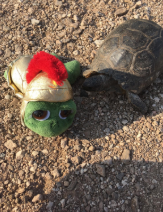 around 1:00 pm local time. On our coach ride to Sounion we stopped to grab a bite of lunch of crepes and Greek salad before continuing our journey.

When we arrived in Sounion, we saw the Temple of Poseidon (Ancient Greek God of the sea) and spent around 40 minutes admiring the ruins and, more importantly, taking photos of Gaius (the Classics mascot) with a tortoise we found wandering the temple.

We then hopped back on the coach and arrived back in Athens just in time for dinner. We had a delicious buffet meal at the hotel and went to bed, exhausted, after an extremely tiring day.

Sunday began with an early start at our hotel in Athens before setting out on our first full day of sightseeing. Our first stop was the Temple of Zeus where the rising sun contributed to the beautiful view of the 17m columns which are fitting for a temple dedicated to the king of the gods. After admiring the temple, we made our way to the Acropolis, a very busy site with ruins of temples and theatres dedicated to Athena, Goddess of wisdom, including the Parthenon and the Erechtheion. We undertook the steep climb up the hill, fighting our way through tourist groups in the baking heat of around 27 degrees, but it was worth it, not only for the impressive ruins but also for the incredible views of the city of Athens below! 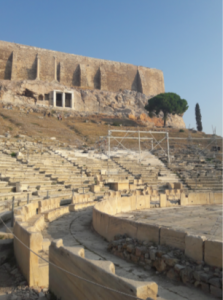 Next, we walked to the ruins of the Ancient Agora, an area similar to a Roman forum with buildings such as law courts as well as stalls and shops where local artisans would sell their products. A temple dedicated to Hephaestus, the God of fire, also stands on a hill in the Agora, with detailed friezes still visible around the edges. We also visited the Agora museum, which showcases amazingly well-preserved artefacts such as jewellery and ceramic pots and there were even a couple of skeletons!

After a delicious lunch of gyros and Greek salad, we set off to the Acropolis museum where all the artefacts found on the Acropolis are displayed. Many of these are statues of Athena and statues of ‘korai’ which show generic female figures of the time, ‘korai’ being Greek for girls.

At around 3pm we headed back towards the hotel to meet our coach driver who would take us on the long journey to Delphi. The windy mountain road provided us with stunning views of the sun setting over the mountains and we ended the long day in our hotel rooms with balconies looking out over the valley.

After we had a quick breakfast at the hotel and took pictures of the beautiful view of the mountains in sunrise, we set off to the ancient site of Delphi. 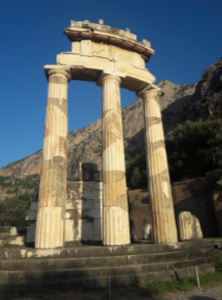 Our first stop was Temple of Athena Pronaia. It consisted of the ruins of a group of buildings dedicated to Athena and also the famous Tholos of Delphi. It was a stop for people travelling to the Temple of Apollo further up the mountain to visit the Oracle of Delphi (which was our next stop). 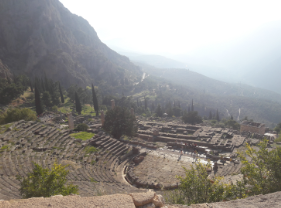 We climbed up the mountain to visit the Temple of Apollo and even though we were exhausted we were all astonished by the view and the beauty of it. We saw the rock on which it was believed the oracle sat to tell people their futures. The oracle has been a part of many famous Greek stories, for example the story of Croesus. He went to the oracle of Delphi to find out whether or not he should fight the Persian empire, to which the oracle replied: “If Croesus goes to war he will destroy a great empire”. Croesus decided to fight the Persian empire thinking they would be destroyed, but instead the “great empire” that was destroyed was his own one (the Greek one).

Then we went to the museum and after a good lunch in the small town of Delphi, we boarded to coach to Olympia. Once we arrived we quickly went out to some of the shops to buy some souvenirs.

On Tuesday we got up early (again) and went to breakfast at the hotel. After driving to the site, we wandered through the ruins of Olympia, seeing the remains of temples dedicated to Hera and Zeus. We then saw the Olympic race track and, of course, we all had a race on it with Miss Nicholas coming in first place followed closely behind by Mairi.

After another delicious lunch in a Greek restaurant we drove to our last hotel of the trip, which had a beautiful view of the seaside. We walked down to the seaside and waded knee-deep into the water (although I fell in and got soaked!). We built sand 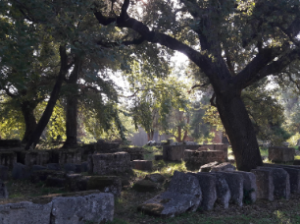 sculptures (some of us attempted to sculpt a Greek statue out of sand) and played hand grenade in teams on the beach.

We then headed back to the hotel for the last time, had a delicious dinner, and headed for bed. 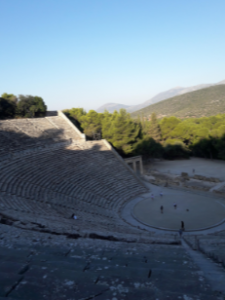 On our final day we hopped on the coach after our last breakfast in Greece. We were driven to Epidauros, a Greek theatre with surrounding ruins. Inside the theatre there were exceptional acoustics, almost identical to using a microphone nowadays but with no feedback! The theatre seats 14,000 people and is still used today. Ancient Greeks would travel to Epidauros for healing. They would pray and then sleep over in one of the many dormitories found in the city where a god would come to them in their dreams and instruct them on how to cure their illness.

After Epidauros we travelled to Tiryns followed by Mycenae. Both sites are built in the time of the Mycenaeans and are said to have been built by Cyclopes because the stones used to build the city walls are too big to have been carried by humans, even with the help of donkeys and carts. Mycenae is also home to an enormous tomb (the Treasury of Atreus) which is built into a hillside.

Finally, we embarked on the 2 hour journey back to Athens Airport to where we did some last minute souvenir shopping before heading home.

We would all like to thank Dr Snook for organising the trip and Miss Nicholas and Mrs McGinn for coming with us.  We all had such a great time and learnt more about Ancient Greece than we would have ever done in the classroom!