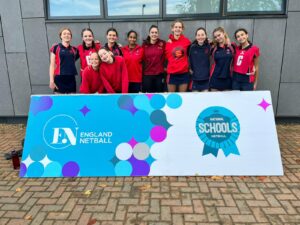 On 20th November our U16 and U14 netball squads competed in the Middlesex round of the National Schools Netball Tournament, both teams aiming to qualify for the Regional Finals in January.

After a lot of rain came the sun as our U16s enjoyed a brilliant day of netball. We played five games in the pool:

We cemented our place as overall division winners before taking on and beating North London Collegiate in the semi-finals. In the final, we faced City of London Girls’ School who had not lost a game the whole day It was a fabulous match which ended with us WINNING 13-6! We are through to the REGIONAL round 29th January 2023! MVP was Ella M. Congratulations to the whole squad on a fantastic achievement! Addy M-S (captain), Jaspreet G, Georgia C, Iris C, Jasmine DRR, Julia B, Ella M, Amelia C, Eliza H and Sophia M.

A huge well done to the U14 A Netball Squad who were crowned Middlesex Plate Winners on the same day. 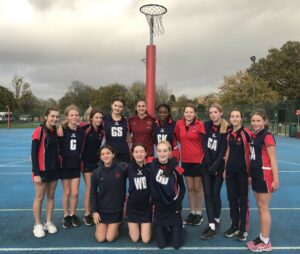 They only actually lost one game all day (by only one goal!) but results didn’t go their way and so they missed out on playing for a place at National Schools Regionals in January.

Went through to Plate Semi Final (finishing third in our pool):

Well done to all our U14s on a great day of netball!