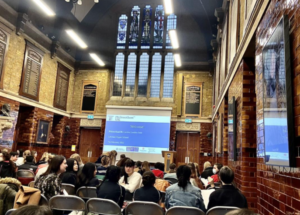 Philosophy is the study of general and fundamental questions. It helps explore the science of nature of humans and welfare which we studied in the Philosothon. I was given this opportunity by my school (NHEHS) to further develop my skills in philosophy.

As we walked into the room at Latymer excitement filled the air, the seats began to fill up with eager students waiting for the exciting activities to start.  The ‘Philosothon’ is a relatively new style of event that originated in Australia, later moving to the UK in 2016 where King’s College Taunton was the first school to host such an event. Now heats take place all over Britain, submitting winning teams to a national competition between the very best philosophy students in the country. These inquiries are judged by a panel of experts, such as Dr. Marius Felderhof: retired  professor of theology and philosophy at the University of St. Andrews, and the University of Birmingham. Its purpose is to promote a collective effort towards critical enquiry and awareness of underlying concepts through constructive discourse. Students receive marks based on their ability to ‘develop a substantive dialogue through engaging with peers’, rather than on the extent of their philosophical knowledge or their argumentative skills.

We were all divided into groups named after famous philosophers. At first, the groups were divided so everyone in our group was in the same school year. In the first round, we discussed an extract about Jack and The Beanstalk  which focused on issues surrounding gullibility and trust and the difference between them, for example, ‘do fairytales encourage children to be gullible?’The second round focused on personal identity considering the idea of a tele-transporter that records the exact states of our cells and recreates them in another location focusing sharply on the philosophical conundrum of ‘if you are the same person you were yesterday?’

There was a short break for a delicious supper as everyone was eager to get back to the discussions. I asked a student called Charlie if he thought this event would make him think differently about simple situations and he said “even since the group discussions ended I have been thinking about every little thing I’m doing could have been life-changing, however I don’t know, it’s making me feel I’m being more aware of what’s around me.”

After dinner we went to our new groups in which the age groups were mixed up so the variety of knowledge and confidence was shared among us all. The last two themes were more challenging and required more thought in comparison to the first two which everyone enjoyed as a way to stretch our abilities including an extract on Sartre.

Overall the evening was so much fun and we all learned something. I am so lucky I had the opportunity to go to this Philosothon with my school.