Superb presentations with Harrow School at the Royal Society: a fitting tribute to an innovative symposium project 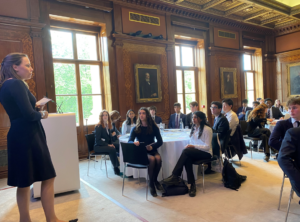 We continued to correspond with the Harrow students after our initial meeting with them about the project, with the bulk of the work being done after our end of year exams. Every group met at least once to collaborate and get work done, usually by meeting at Harrow school and working in their library. After a few months, each group had planned a 1500 word essay responding to their respective question on the theme of gender, which they had (somehow!) managed to summarise into a 10 minute presentation. We were all then fortunate enough to have the opportunity to share these presentations at the Royal Society in St James’: a very insightful afternoon, since we were able to learn about everything from sex-changing trees to the presentation of Hermaphroditus in Ovid’s Metamorposes.

After each group finished presenting, all the other groups gave some feedback: both positive things and areas to improve upon. This was collated by teachers from Harrow and NHEHS so that, by the end, 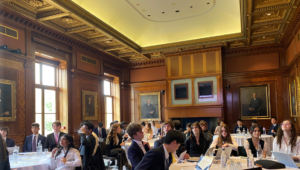 Once the applause had finished, we headed to Honest Burgers in Baker Street to enjoy some delicious food, including decent vegan options at a burger restaurant which is honestly something to celebrate. It was great to be able to relax after a mildly nerve-wracking day of presentations and to talk with our preexisting friends from NHEHS and our new friends from Harrow.

This sense of connection and community was a great thing we’ve all taken away from this experience; the ability to connect with other students who have similar interests in an academic context meant that, while we were intellectually challenged, we could learn from each other and figure out how to balance having fun and getting to know each other with being academically productive. Overall, we’re all very glad to have been involved in the symposium and the teamwork and collaboration skills we’ve strengthened will help us for the rest of our lives.