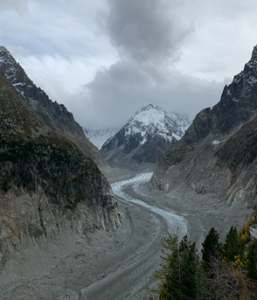 During the October half  term, 45 students and four teachers were lucky enough to go to Switzerland on a geography trip.

We were accompanied my Dr Pearce, Ms Duns, Ms Munro-Hall and Mr Livings. Arriving at Heathrow airport at 4:30am is never a good thing, even under the best of circumstances. There is a special kind of exhaustion experienced after waking at 3am, which affects apparently only teenagers, since the teachers seemed very lively! After a brisk walk to the gate, no-one was feeling any better about being awake at such an unnatural hour, so when we boarded the plane many of us succumbed to sleep. We all felt a lot more energised, however, when we disembarked at Geneva Airport into the freezing rain. Thankfully, we found 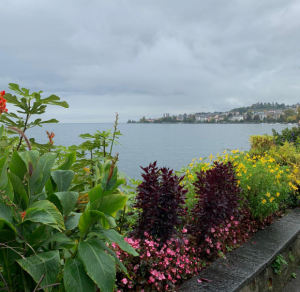 our coach driver, Claude, then set off for a quick lunch in Montreux, followed by a relaxing session at Lavey Les Bains. On the coach ride there, Mr Livings provided us with some excellent commentary. 42% of students surveyed said that Lavey Les Bains was the best part of the trip. The thermal baths and jacuzzis with stunning views were a huge hit with everybody, but the most popular part everyone referred to simply as ‘The Whirlpool.’ It was a circular pool with water moving in a doughnut shape, with currents strong enough to carry you along. It was awesome! After dragging ourselves out of the warmth of the baths, we returned to the hotel for a buffet dinner then some much needed sleep.

The next day, we had a slight lie-in then set off up the Berneuse Mountain in cable cars. Hands sweating, we tried to look at the breathtaking views rather than the ground which was rather too far away for comfort. When we reached the top, we learnt one of our key pieces of Geography / Biology: zonation. Later on that day, we crossed the border to Chamonix in France, to see the ‘Mer de Glace’ glacier. It was sobering to see how quickly it was melting due to climate change. When we were there, however, it was absolutely freezing! I don’t think I have ever been so cold, despite wearing a scarf, and as many layers as I could put on without looking like a snowman. 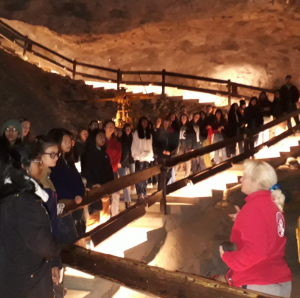 On Wednesday, we started off the day by going to the Bex Salt Mines. We were shown around by a very excitable and slightly eccentric tour guide, Natalie, who spoke ‘Franglais,’ a strange sort of blend of English and French. Thankfully, we all just about managed to keep up. We learnt about how rock salt is mined, and the issues that would be facing the mines in the future. We travelled in a mini train through the tunnels, which was one of the highlights of my trip. One group, however, managed to get stuck on the way back. I still have no clue how that happened.

We then set off for the ‘Maison de Gruyere,’ a huge cheese factory. They gave each of us a sample pack of cheese with three cheeses of different ages, which were very popular with some people and hated by others. Rhea Johri said that her favourite parts of the cheese factory were the ‘cheesy puns, they were just grate, simply brieliant!’ 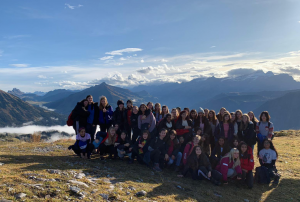 Eventually, we set off for perhaps our most anticipated destination: the Cailler Chocolate Factory. There we learnt about the history of chocolate and some quite questionable explanations of how chocolate is really good for you. I decided to buy lots and lots of chocolate in the shop, just in case. Luckily, they also supplied quite a few free samples. I left feeling a bit queasy, thinking I would never eat any chocolate ever again.

On the last day, we visited the United Nations in Geneva. We saw the assembly chamber, and learnt about the UN’s beginnings. It was amazing to be in a place that emanated such importance — people were bustling around debating all kinds of exciting things. It was truly incredible. After that, we headed back to the airport, and, after a very bumpy plane journey, were reunited with our families.

Thank you so much to Ms Duns, Ms Munro-Hall, Dr Pearce and, of course, Mr Livings for such an amazing trip!