We enjoyed a successful week at the annual Harrodian Netball Tournaments last week, with the rain holding off for all the Year groups except for the U12s whose tournament was sadly cancelled due to bad weather.

Our U15s were winners of the U15 tournament on 24th November, first winning through their pool of five matches:

In the Semi Finals we played against Godolphin & Latymer which went into extra time as it was 6-6 at the end so a further two minutes had to be played, with NHEHS coming out as the winners 8-6. In the final we took on and beat Surbiton High 5-2 to be crowned winners of the whole tournament!

Our U18 team took part in the same tournament on 23rd November. 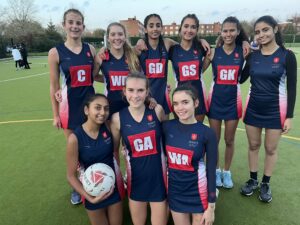 Luckily the rain disappeared leaving us with a bright sunny (but chilly) day. We were drawn in pool B (6 teams in both divisions) and the results were as follows:

The results meant we went through to the semi-finals as runners up. We lost 3-18 to Godolphin & Latymer in the semi before losing to Surbiton 4-13 in the third play play off. Overall the squad had a great team effort and are looking forward to training to practice in prep for future tournaments.  MVP was Yasmeen C.

Our U13 team took part in the tournament on 22nd November. 11 teams participated and 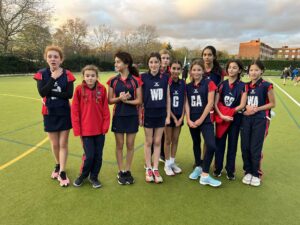 we were in a pool of 5 winning all games!!

In the semi-finals we played a great match against Ibstock but narrowly lost 5-6. We finished fourth overall after losing the 3rd place play off 5-7 to Godolphin & Latymer. MVP was Meredith J.