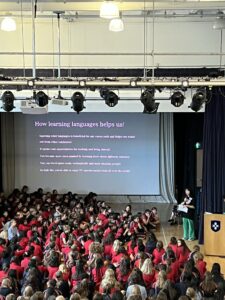 At the end of September we celebrated our Week of Languages which this year took the theme of ‘Languages and Careers.’

Frau Schindler-Smith and our MFL Reps launched the week at assembly on Monday, coinciding with the European Day of Languages itself on September 26th. We welcomed linguist Sophie Lau who spoke about the huge range of career opportunities for people who are able to speak different languages, including Arsène Wenger, Angela Merkel, JRR Tolkien, Ellen McArthur, Novak Djokovic. She cited the variety of her own career thanks to her languages, including roles working in international marketing, journalism, translating, teaching and public speaking. Sophie also referred to friends and colleagues of hers with language skills who used these skills extensively in jobs

Our Year 8 and Year 10 students carried out job interviews in their languages as part of a Languages and Career workshop. Students had to “pitch themselves” then interview each other in pairs. The interviews were recorded and shared with the rest of

Students were challenged in a marketing competition to market a British product to China, followed by an intriguing Chinese GCHQ

quiz. In the atrium, Chinese sweets were put to the taste test by Year 7 and 8!

Everyone looked forward to Wednesday breaktime with great anticipation as it was time for the amazing German breakfast which included Franzbrötchen, Berliner Pfannkuchen and Spitzbuben! Year 9 was not just exceptional in setting up the stall but also when putting in their order in fluent German.

The day also saw the launch of the exchange programme with Karlsruhe for Years 8-11 and for our Sixth Formers a discussion around UK-German connections and work experience. 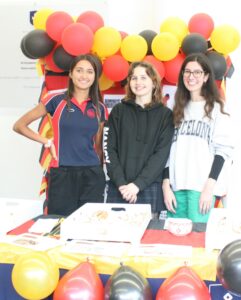 Students were challenged in lessons with a language quiz on German brands and were surprised when they realised how many  job opportunities German businesses have to offer!

Also on Wednesday, our Sixth Form Italian students travelled to Harrow School for a cooking lesson to learn how to make a delicious risotto. More on that here.

And of course, breaktime was a highlight of the day, with free Spanish food (homemade tortilla, chorizo and olives) for students 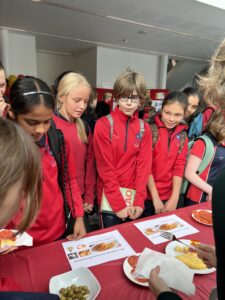 who asked in Spanish, much to the delight of the hungry Year 7s! Watch how they got on here.

Our Spanish A Level students attended the London Spanish Film Festival at the Ciné Lumière. They were lucky enough to meet flamenco music legend Jorge Pardo  (pictured) after watching the film TRANCE based on his life and his unparalleled contribution to contemporary flamenco music. An unforgettable evening!

Friday was French day with a wide range of activities for students from Year 7 up to Year 13. Year 7 enjoyed a quiz on multilingualism, while Years 8-10 prepared interviews, including a workshop on applying for jobs in French. Year 11 took part in a fun speed dating style job interviews in the language – with extracts of film to set the scene. Our Sixth Formers took part in a research and passport project, where students researched famous entrepreneurs and also created their own CVs in French.

An undoubted highlight was the legendary Crêpes Café in the atrium, where Mme Spencer cooked homemade crêpes, attracting queues 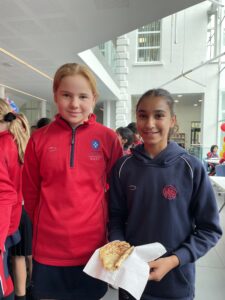 all the way to reception! Bien sûr, students were only given a crêpe if they asked for it in French! Watch them trying out their best French here.

The week ended on a lovely note, with a French film evening open to all staff and families, showing ‘La famille Belier.’ All proceeds from the film and German breakfast went to Médecins Sans Frontières.

A big merci, grazie, gracias, Danke and Xièxiè to our MFL staff and subject reps for creating such a wide variety of inspirational and educational fun activities.